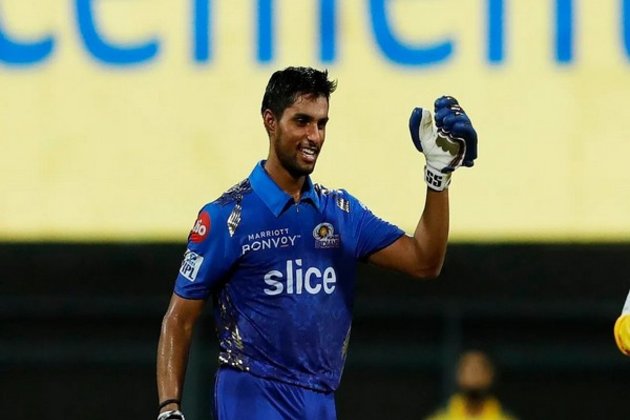 With this win, MI is currently at the bottom of the points table with six-point. CSK is at ninth position with 8 points.

Chasing just a mere 98 runs target, Mumbai Indians got off a poor start, losing the opener Ishan Kishan on the fifth ball of the innings after Mukesh Choudhary's delivery found the edge of his bat and landed in the hands of wicketkeeper MS Dhoni.

Tilak Varma then joined Sams on the field to keep Mumbai's scoreboard moving. Things started to pick up for CSK after Mukesh Choudhary's picked his second wicket of the match as he dismissed Daniel Sams for only one run. This wicket rattled Mumbai's batting order leaving the team's total at 33/3 in 4.3 overs. In the same over Choudhary struck again and sent the debutant Tristan Stubbs back to the pavilion without scoring a run.

At that point, Mumbai needed a steady partnership to achieve the target in the remaining balls. The duo of Hrithik Shokeen and Tilak Varma batted aggressively against CSK and smashed them all around the ground.

The duo took their team's total beyond the 50-runs mark in the 8.2 overs. Both the batter continued to pile up runs further. By the time ten overs ended, MI had recovered from the early hiccups and stood at a solid 66-4, with Varma (17) and Shokeen (15).

The onslaught on the CSK bowling attack did not stop in the second half of the innings either, with the duo going all out against Dwayne Bravo, Mukesh Choudhary and Simarjeet Singh. Man in yellow took a sigh of relief as Moeen Ali dismissed Hrithik Shokeen on 18 runs. This brought Tim David to the crease who smashed a six in Moeen Ali's over to take Delhi three runs closer to a win. In the 15th over of the match, David smashed another six off Moeen Ali's delivery to register the third win of the season for Mumbai with five wickets in their hands.

Earlier, Chennai Super Kings (CSK) captain MS Dhoni (36) was left-hanging as the lone warrior for his side, as a brutal pace attack by Mumbai Indians fast bowlers skittled out the Men in Yellow for 97.

It was a poor outing for CSK batters, as except Dhoni, Ambati Rayadu, Dwayne Bravo (12), Shivam Dube (10), nobody could touch double figures. Daniel Sams was breathing fire with his pace, as he triggered an early collapse of CSK batting line up that concluded with them getting all out below the 100-run mark.

Put to bat first, Chennai Super Kings got off a terrible start as they lost their entire top order within the first two overs as the pace duo of Jasprit Bumrah-Daniel Sams toyed with helpless CSK batters. The first one to depart was the in-form Devon Conway for a duck in the second ball of the innings, followed by Moeen Ali two balls later, contributing zero runs.

After the dismissal of Robin Uthappa in the second over by Bumrah, Ruturaj Gaikwad and Ambati Rayadu attempted to rebuild the innings, only to be stopped by Sams, who dismissed Gaikwad for 7 off 6 with assistance from wicketkeeper Ishan Kishan's safe hands, sinking CSK to 17/4.

This brought captain MS Dhoni to the crease in the fifth over itself. The skipper hit a good boundary and Rayadu also looked good at the other end, but the latter was also dismissed by pacer Riley Meredith for 10 off 14 with another catch taken by Kishan. With this, half of CSK's side was back in the pavilion, with the scorecard reading 29/5.

At the end of the powerplay in six overs, a helpless CSK stood at an alarming score of 32/5 in desperate need of a partnership, with Dhoni (6) joined by Shivam Dube (3).

Spin was introduced to the attack in form of Hritik Shokeen in the 7th over. Meredith prevented the duo of Dhoni and Dube from making any impact whatsoever as he dismissed the latter for 10 at the team's score of 39/6.

This brought the West Indies all-rounder Dwayne Bravo to the crease to join Dhoni. The duo tried to stabilize the innings with some heavy hits and consistent strike rotation. At the end of 10 overs, CSK stood at 65/6, with Dhoni (21) and Bravo (3).

The duo's rescue efforts for CSK could not last for long as 39-runs deep into their stand, Bravo was caught by Tilak Varma and dismissed by Kumar Kartikeya for 12. Bowler Simarjeet Singh was dismissed three balls later, with CSK reduced to 80/8. Maheesh Theekshana followed next, being dismissed by Ramandeep Singh, leaving Super Kings with only one wicket to defend.

At the end of 15 overs, CSK stood at 87/9, Dhoni (32) and Mukesh Choudhary (4). Dhoni continued being the lone warrior for CSK, smashing Meredith for a six in the 16th over. But an unfortunate run-out at the final ball of the over skittled out Super Kings for just 97. Dhoni stood at 36.

Daniel Sams was the pick of the bowlers for MI, with 3/16 in their four overs. Meredith (2/28) and Kartikeya (2/22) also bowled well. Bumrah and Ramandeep Singh got a wicket each.