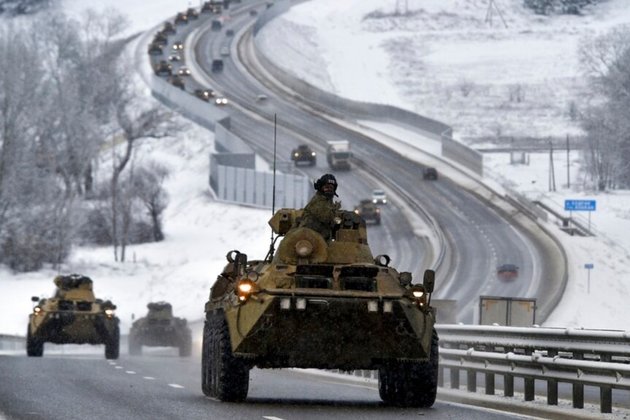 WASHINGTON - Russian President Vladimir Putin appears to be preparing to launch an invasion of Ukraine, with more than 100,000 troops positioned around the country. Certainly, the U.S. believes that's the case and President Joe Biden has warned Ukrainian President Volodymyr Zelenskyy that an attack could come in February.

But Russia denies it's preparing to invade, and Putin's intentions remain a mystery.

Russia, which is seeking a pledge that NATO won't expand to include Ukraine, has options it could pursue short of a full-blown invasion, and other ways to lash out at the U.S. and its allies. All of them carry varying degrees of risk, to Russia and the world.

A look at some of them:

Something short of a full-scale invasion: In 2014, Russia seized the Crimean Peninsula from Ukraine. That year it also started arming rebels in the eastern region known as the Donbas, starting a low-boiling conflict that has killed more than 14,000 people. Many Russia watchers speculate that the recent buildup of Russian troops and naval forces is the next chapter in a larger effort to chip away at Ukraine, perhaps taking advantage as the U.S. and its allies in Europe are distracted by COVID-19 and other issues. Possible scenarios include providing additional support to the Russia-backed rebels or launching a limited invasion, just enough to destabilize Zelenskyy and usher in a pro-Kremlin leader.

Stopping short of a full-scale invasion would give Russia more time to get more forces in place and test the commitment of the U.S. and its allies to the punishing sanctions promised by Biden, says retired Lt. Gen. Ben Hodges, former commander of U.S. Army forces in Europe. "He's going to continue doing what he's doing right now, continuing to apply maximum pressure on Ukraine and to try to destabilize the government to alarm people," Hodges said. "There's a lot of capability in place to do more, should the opportunity present itself."

That might still end up triggering sanctions that could damage the Russian economy and hurt Putin at home. There's also the risk that a limited action isn't enough to achieve the Russian president's goal of undermining European security by rolling back, or at least halting, NATO expansion, says Dmitry Gorenburg, an analyst with CNA, a research organization in Arlington, Virginia. "I don't think it gets him what he wants," he said. "It didn't get them that before. So why now?"

Economic warfare: Russia is a major player in global energy, the third-largest oil producer after the U.S. and Saudi Arabia, and the source of about 40% of the natural gas used in Europe. It is also a major exporter of wheat, particularly to developing nations. Any move to cut the flow of energy could be painful to Europe in winter with gas and oil prices already high.

Similarly, rising food prices are a problem around the world.

Putin has some economic leverage, but there's no indication he would use it and it could end up hurting Russia in the long run, says Edward Fishman, a former State Department official who is now a senior fellow at the Atlantic Council's Eurasia Center.

Ukraine: What We Know

Any move by Russia to cut off gas shipments would push European nations to find alternative sources for the future. "It's a weapon you can only use once," he said. "You do that once and you lose that leverage forever." The Biden administration is already working with Qatar and other suppliers to replace Russian gas if needed.

Cyberattacks: There's no doubt Russia has the capability to conduct significant cyberattacks in Ukraine and around the world, and would almost certainly do so again as part of any operation against its neighbor. The Department of Homeland Security warned law enforcement agencies on Jan. 23 that Russia would consider initiating a cyberattack on the U.S., including possible actions against critical infrastructure, if it perceived the response to an invasion of Ukraine 'threatened its long-term national security."

Russia is the suspected culprit in a 2015 hack against the Ukraine power grid. Hackers this month temporarily shut down government websites in Ukraine, underscoring how cybersecurity remains a pivotal concern in the standoff with Russia. "Whatever the size and scale and nature of their ground and air attacks, cyber will be a big part of anything they do," warns Hodges.

The risk to the world is that hostile activity against Ukraine could spread, as the cyberattack known as NotPetya did to devastating effect in 2017. The downside to Russia is the U.S. and other nations have the power to retaliate, as Biden warned Putin in June. 'He knows there are consequences," Biden said.

The China factor: China isn't a direct player in the standoff over Ukraine, but it plays a role. Observers have warned that Moscow could respond to Washington's rejection of its security demands by bolstering military ties with China. Russia and China have held a series of joint war games, including naval drills and patrols by long-range bombers over the Sea of Japan and the East China Sea.

U.S. officials have said they don't think Russia would launch an invasion as President Xi Jinping presides over the opening of the Winter Olympics in Beijing. "The Chinese are not going to be pleased if their Olympics are disrupted by war," Gorenburg said. Putin plans to travel to Beijing to attend the opening of the games, as U.S. and European leaders sit it out to protest human rights abuses.

One theory among Russia watchers is that China is intently following the U.S. and European response over Ukraine to gauge what might happen if it were to move against Taiwan. Hodges sees that as a risk. "If we, with our combined diplomatic and economic power plus military power, cannot stop the president of the Russian Federation from doing something that is so obviously illegal and wrong and aggressive then I don't think President Xi is going to be too impressed with anything that we say about Taiwan or the South China Sea."

A Russian buildup in Latin America: Senior Russian officials have warned that Moscow could deploy troops or military assets to Cuba and Venezuela. The threats are vague, though Russia does have close ties to both countries as well as Nicaragua. U.S. national security adviser Jake Sullivan dismissed the idea, and experts in the region and around the world view it as a strategy that probably wouldn't accomplish much, other than to divert Russian forces needed elsewhere, and thus is unlikely to happen.

A more likely scenario is that Russia steps up its already extensive propaganda and misinformation efforts to sharpen divisions in Latin America and elsewhere, including the United States.

A diplomatic solution: It's not a foregone conclusion that the standoff ends in an invasion. While the Biden administration said it would not concede to Russia's security demands, there still seems to be some room for diplomacy. Russian Foreign Minister Sergei Lavrov said Thursday that the U.S. response "gives hope for the start of a serious conversation on secondary questions."

France, Germany, Ukraine and Russia have agreed to sit down for talks in two weeks, an effort aimed at reviving a 2015 agreement to ease the conflict in eastern Ukraine. Some fear this complicates efforts by the U.S. and NATO to show a united front against Russia.

A stand-down may be good for the world but could come at a cost for Putin, Russian journalist Yulia Latynina warned in a New York Times essay Friday. She said the Russian president may have used his troop buildup as a bluff, hoping to compel the U.S. and Europe to relinquish any intention of closer ties to Ukraine. "Instead of trapping the United States, Mr. Putin has trapped himself," she wrote. "Caught between armed conflict and a humiliating retreat, he is now seeing his room for maneuver dwindling to nothing."